Fish are kind of a theme for me.

I’m not going to claim to be a talented artist, but it is fun and relaxing to draw, and I’ve been playing around with Krita on my new laptop.

I drew a betta fish. Sort of. I didn’t actually know how to get the shape of the head/mouth from that angle, so I gave it a goldfish head instead. Ha. Ha. Ha. 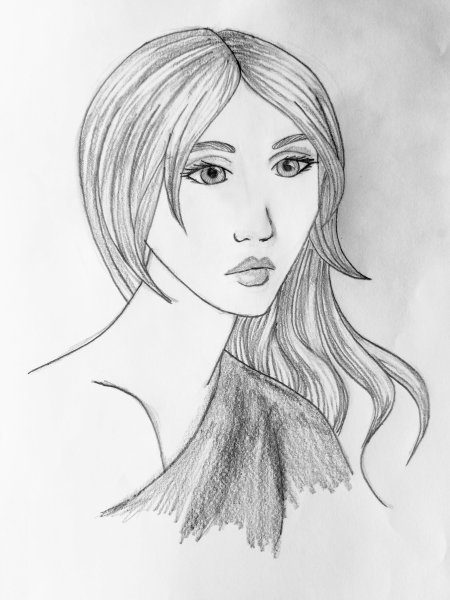 Alrighty, here’s a drawing of my own. Totally embarrassed. Put off posting it for awhile too.

I like to trash my art skills, but the truth is, I used to do an enormous amount of drawing.

I got a Wacom tablet as a teenager, and spent hours and hours in Corel Photo-Paint, learning the ins and outs of how creating art on the computer — I even won an award for it during my Senior year of high school. All told, I wasn’t really that bad. I had that Wacom tablet for years, until my cat tried to get into my desktop fish tank and killed it with a good soaking of water.

One of my relatives gave me her old set of Prismacolor pencils for Christmas, and I started exploring different techniques of coloring, growing to favor heavy blending. Naturally from there, I stepped into watercolor painting.

But, as it is often put so eloquently, shit happens.

Resuming “being yourself” after trauma is a process, and it takes a lot time. I started with sewing and crochet, learned how to knit and cook-with-passion, and made several ventures into writing before I was ready to commit myself to the craft once again, but art never grew to be anything more than the occasional silly doodle. Every time I thought about it, I felt strained at the time it would take to practice, practice, practice. I just didn’t want to draw the same thing over and over and over, when I had so many other things to do.

Besides, there are lots of amazing artists out there that I enjoy, who do things that I never would have thought of. I had always been frustrated with how limited my imagination was when it came to drawing, even as a teenager. So, I let that part of me go, at peace with the idea that it would never return.

Every now and then, I see something that makes me ache to start drawing again, and it’s been happening a lot lately. Things like watching Bernadette Banner create fashion portraits, or marveling at how beautiful Hollow Knight is. I’ve started thinking that I could start drawing again.

I’m at that part of pregnancy where I’m dead tired of watching movies and endlessly playing video games, but my low blood pressure won’t permit the up-and-down of sewing, my morning sickness protests at the back-and-forth of cooking  (I wouldn’t be able to eat much anyway), and I’m far too forgetful to hold a story in my head. How long does the first trimester last? Eternity.

Anyway, drawing would be something for my hyperactive brain to play with. I could get my husband to dig out my old reference books from the basement, dust off my mad skillz, and fight the kids for the computer. I can always start with character portraits for my latest novel, to keep it active in my mind as I slog my way through the latter half of the first trimester.

Now that I’ve written all this, watch something come up that prevents me from following through, lol. Life is far too often like that for me.