There’s a decent chance that the children will be the death of me before Christmas. It’s been fun, but there comes a point where you just can’t keep putting off the inevitable. I go with peace.

We’re in the homestretch, which means that there’s a flurry of activities to accomplish before the big day, as well as wondering if I’m going to have any chance at all of finally making personalized Christmas stockings this year (probably not). It’s our tradition to decorate gingerbread houses with the kids, and I still have my heart set on making a yule log cake. And, of course, I need to finish sewing Christmas outfits for all the kids.

And the children are increasingly excited as they count down the days.

So I’m signing off to focus on the real world.

Me: Sometimes I want to go on 4chan and randomly cuss people out for no reason.
Husband: I can help you with that.

I have become such a battle-hardened mama, I didn’t even flinch.

She went straight into timeout.

This week, my family was blessed with the opportunity to participate in our local natural disaster! WOW!

The weather report issued a high wind warning, which we tend to take pretty seriously around here. Monday night I checked the warning to get an idea of what we were looking at, then we swept around the yard to get it ready before calling it a night.

After a few hours of fitful sleep and nightmares about the wind, I decided to get up at 5 AM (confession: strong winds terrify me). The windstorm had been as expected by that point, so I settled down on the couch to doze until the kids woke up.

At 6 AM, the wind suddenly picked up. A lot.

There were loud cracks and snaps as large branches broke. Out the window, I watched our picnic table flip onto its side and get pushed towards the fence. Then the power went out.

As I listened to the wind gusts, I got so scared that I woke the kids up and brought them down to the living room where it was safer, even though I knew the disruption would have them behaving like little monsters for the rest of the day.

At 7AM, it slowed down enough that we dared venture outside to look at the damage.

And we saw this:

The large pine tree in our front yard.

Thankfully, it fell straight along the fence line. Any other angle would have caused serious damage to either us or our neighbor. Eerily, it made hardly any sound when it fell.

Our power was out for two days.

I’d whine about it, but meh, we’re weirdos and it didn’t actually bother us that much. I liked the quiet, and it was nice to use the oil lamps and candles. We have a vintage gas oven, so I was even able to bake brownies while the power was out.

All told, it was considerably worse than the earthquake back in March. 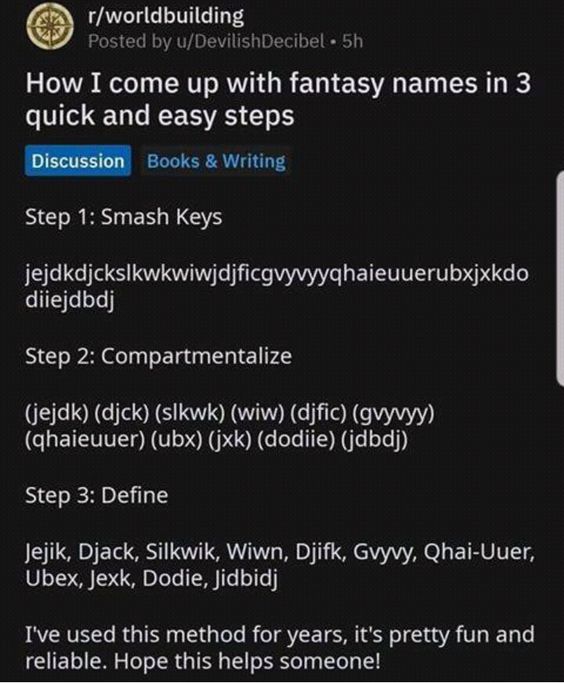 This made me laugh my butt off.

I quit using made up fantasy names when I was 15, and I don’t like reading books that use them either.

But I still laughed my butt off.

The General sat down and laid out the folder he carried on the table, flipping through the pages as he mused, “Let’s see… I pulled a copy of your psych eval, and it says here that you were raised in foster care; that you have a healthy respect for authority and rules; and that you are satisfied with life…” He set the papers down and looked Carol square in the eyes. “To put it bluntly, you are obedient and unambitious, which is why you were selected for a menial job that lets you have access to the military’s top asset. I bet that you don’t have much of a personal life, and you spend every night at home curled up with a book and a glass of wine. Am I wrong?”

“Well Carol, here’s the thing: we reviewed our security footage from the bunker, and while it’s clear that MSG Hartmann was behaving aggressively, we can’t find any justification for your decision to close and activate the Suit. Now, we have already decided that someone is going to be punished for failing to keep an armed guard on the Suit at all times, and it’s up to me to decide whether or not you deserve to see the light of day again. Am I clear?”

“If you agree to cooperate with us and provide us with detailed information to the best of your ability, your actions will be pardoned. Do you understand?”

“Good. Now, explain to me exactly what happened while you were inside the Suit.” The General watched her intently, leaning forward slightly in anticipation. She could tell that he carried the curiosity of the entire military on his shoulders, and whatever she said now would be engraved in the records, for frequent consultation and study.

She took a deep breath, closed her eyes, and mentally replayed everything. “I panicked and hit the button without thinking… When I saw that the master sergeant was injured, I nearly fainted, but I think that the Suit sensed that somehow and increased the oxygen content in the air to help me. Um… Oh yeah, when it first turned on, it said, ‘User recognized’ I think.” Carol wasn’t at all coherent, and she felt herself turning red with embarrassment; all she could think about was how her babbling was going on record, forever. “The master sergeant had said something about a safe mode, but I definitely wasn’t using that in the Suit,” she finished lamely, to get the torment over with.

“Do you know why the Suit recognized you as a user?” the General asked.

“No. I don’t have the slightest idea.” Carol started picking at the cuticles on her fingernails, working at one in particular until it stung and bled, feeling self-conscious all the while. The permanent record was also going to describe her as a nervous wreck, for certain.

The General nodded to the captain, who pulled a small notepad out of his pocket to write on. “How did you know about the on-board surveillance system?”

“I accessed the help system, and it, uh, seemed like a good idea.” She stuck her bleeding finger into her mouth to chew away the skin she had pulled lose, and used the distraction to compose herself better. “I didn’t want to get myself into any further trouble,” she finished, with more confidence.

“Well, Carol, from now on you are the sole pilot for the Suit.” The General stood. “CPT Lambert here will oversee your training, so treat him like your best friend.” The captain stood and saluted him, then they both stared at her until she also rose to her feet and gave her own sloppy salute. The General’s parting words were said more to the captain than to Carol, “Don’t disappoint.”

Once they were alone, the captain said, “This assignment is top secret. You are in the process of being moved to private living quarters on base, and all of your communications will be monitored and censored if necessary. You are no longer a civilian. After every training exercise, you will file a detailed report on everything that happens in the Suit; if you pass gas, I want to know about it. Understood?”

“Yes, sir,” Carol answered. Her heart was palpitating, torn with a mixture of yearning at the thought of being allowed to enter and use the Suit again, and a sense of dread over the restrictions that came along with the privilege.

“I will grant you the rest of the day to yourself, and I will see you in the Bunker One at 0600. Dismissed.” The captain pulled out his notepad again, and started writing rapidly.

Carol walked to the door, then hesitated. “Uh, sir?” she asked timidly. “Where are my living quarters?” But the captain just waved her away and turned his back. She stepped outside, and nearly bumped into the soldier that was standing guard.

“Ms Carol!” he said, saluting. “I have been assigned to escort you. Follow me.”

“Are you showing me to my new home?” she asked, skipping to keep up with his brisk pace.

“I can also escort you to the mess hall, if you are hungry,” the soldier replied. “Or to the rec room, if you desire.”

“Does that mean… you’ve been assigned to follow me everywhere?” Carol was flabbergasted. She had never imagined that, as someone who’s job and ambition was to clean, she would ever lose all of her personal freedom.

“Escort,” the soldier repeated with a smug smile.

“Home, then, and please tell me that no one is going to be posted inside my bedroom. I’m still a human being, you know.”

“Orders are to keep your door locked at all times unless you request to leave; then you are to be escorted.”

“Oh, great.” Carol sighed. “Just great.” A thought occurred to her, and after taking a minute to work up the nerve, she timidly asked, “What happened to the master sergeant?”

“Do you think he’ll try to kill me and steal the Suit?” she pressed anyway.

“I don’t think about classified information.” The soldier stopped and saluted. “We have arrived at your quarters. Goodnight, Ms. Carol.”

“Goodnight…” she paused to read the name tag on the soldier’s uniform. “Holmes. See you in the morning, I guess.” Then, perhaps because her nerves were shot and she couldn’t imagine the day getting any worse, she uncharacteristically grinned and joked, “I have training at 0600, so make sure I don’t sleep in. I’d hate to be late on my first day,” before retreating to the solitude of her room, and the chance to finally process everything.

My better judgment is telling me that I need to take the next three months off from posting anything. Don’t worry, Light Eternal is completely written and ready for reading (so you aren’t going to get gypped out of an ending), I just have other things going on for the next while.

See you in August.

I updated all of the Fade to White posts to include the ENTIRE chapter, instead of having a preview then linking to my FictionPress account. You can now read the ENTIRE story posted thus far without leaving wordpress.