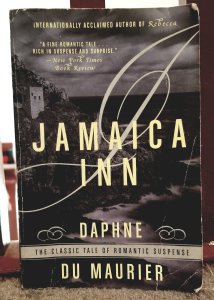 When I was in middle school, a friend excitedly told me about a book titled Rebecca, and recommended that I read it because the main character was a lot like me. I’m still not convinced of the similarity between me and the main character, but I definitely liked how dark and gothic the story was. Rebecca became one of my favorites.

A few years ago, my copy was stolen out of our car by a pot-head, who probably thought that the red satin cover meant it was a trashy sex book. Hopefully, she enjoyed it anyway.

I decided that it was time to get around to replacing my copy, and picked up something else by Daphne du Maurier in the process. Despite how much I liked Rebecca, I had never felt any interest in reading any of her other books before now.

I settled on Jamaica Inn.

The horror and suspense are very well written; subtle and unrushed, which gives the reader time to properly appreciate the dark situation the main character finds herself in. I think that the impact of the BIG REVELATION was a bit lost on my modern Millennial mind, given that we currently live with mass murder being a depressingly common thing and all, but it wasn’t hard to appreciate it in the context of the book.

However, the romance was the weakest point, and the overall story would have been improved if it had been left out all together. It came across as a strange mixture of Mary-Sue fantasizing and self-loathing, and didn’t feel natural in the slightest. Every mention of love could have been blacked out and the plot would have remained entirely unchanged.

There was a very bad attempt to hand wave away a glaring plot hole two-thirds of the way in, and the story never quite recovered afterward.

My favorite character was the vicar, and I wish that he had more “screen time” so to speak. This probably attests to how weird of a person I am, but his lines were the ones that made my heart quicken with excitement, and I would ravenously devour any book that was written all about him. Unfortunately, he only appears a few times, and serves as a handy prop to make the ending more DRAMATIC. Still, I liked him.

The ending was not what I would have written, and I personally found it unsatisfying. While I am mindful of the fact that this book was published in the 1930’s and society was different back then, I still think that the choices the author made were lackluster and cowardly. Why does fiction have to be so black and white all the time? Real life sure as heck isn’t.

Finishing the book left me feeling disappointed and morose.

My kids very generously soaked my copy in water, but thankfully I didn’t have the dust jacket on at the time. You can barely tell that the cover underneath is warped.

This is a novel about two brothers, and a magical forest where the mythological figures of the collective consciousness literally come alive.

The first half of the book is a fairly exhaustive explanation of the forest and its magical inhabitants, named ‘Mythagos’, which feels fairly slow paced. It takes place primarily on a homestead on the edge of the forest, and the main character makes a point of avoiding going too far into the woods. The reader is also given quite a bit of background on the main character, his brother, and their father who had dedicated his life to studying the forest, but whose death serves as the catalyst for the events in the novel. There’s also a woman Mythago, the manifestation of the warrior princess archetype, who captures the main character’s heart and sends him hurtling helplessly into love.

The second half, which takes place in the forest itself, feels dissociative and confusing at times, heavy with mythological references and metaphors, turning this book into a very slow read for me.

However, I have forgiven all of that.

The author was seriously “tuned in” with the subject matter, and the book has a lot of metaphysical depth to it, which makes it good ‘thinking’ material. I have no doubt that this novel will leave a lasting impression, and I’m interested in reading some of the other books about this forest.

The villain is the most cold hearted bastard I’ve ever encountered in a story, and he uttered an absolutely amazing line (which won’t make any sense without context) that had me giggling with sadistic glee. His inevitable defeat came about in a way that was, frankly, unexpected.

Happy ending for most.

I feel bad for the mother, who is mentioned in passing as having committed suicide long before the events in the book take place. Poor woman.

I like to (semi)jokingly refer to myself as a fairy, given my penchant for wild mushrooms and secret acts of mischief kindness. I also have what I refer to as a curse when it comes to cast iron. Ergo, I am a fairy. QED. My logic is flawless.

Cast iron cooking is really yummy, so I’ve decided to make peace with my skillet. Yes, I know, I gave up on you and put you away in storage for a long time, but I couldn’t figure out why your seasoning kept flaking up. No, we aren’t going to talk about what happened to your predecessor.

I settled on this book, because I LOVE Southern cooking. I learned how to cook in the South.

The intro gives a basic rundown of cast iron care, and might have said some other stuff that I didn’t read, because nobody reads the intros. I found all of the recipes to be approachable as an amateur chef, though they definitely require more investment than mixing frozen foods with pre-made sauces.

I made the chicken pot pie.

I didn’t follow the recipe exactly. I brined my chicken before baking it, then used the meat drippings in the gravy. It turned out exquisite, but I definitely used a skill set that was not discussed anywhere in the book.

My complaint is that, although it’s supposed to be heirloom cooking, it calls for shortcuts like using frozen pie crusts. I would have liked to see recipes for pie crusts, biscuits, etc., considering that these are essential elements and have a huge impact on flavor. Seriously, pie crust only takes a few minutes, and Southern cooking is about feeding the soul. You don’t want a frozen soul, do you?

The desserts are even worse, using boxed mixes in lieu of any actual recipe at all.

At this point, it’s still up in the air if I’ll manage to get along with my cast iron.

[Ed. note: the curse appears to be very real – somehow the contents of this (scheduled) post were transplanted onto a preexisting post, and retrieving it became quite the adventure.] 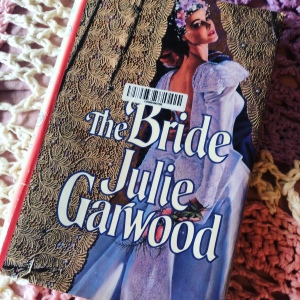 I’ve read other books by Julie Garwood that I enjoyed, so I had expectations for this one. However, if I had randomly found this book in a thrift store and read an excerpt from the middle, I very likely would have skipped it.

The main character is your classic Mary-Sue, who is described as being exceedingly beautiful (but naturally she doesn’t know it), possesses a man’s name, and is very intent on telling everyone and their dog that she isn’t a typical woman, before turning around and doing typical things left and right — like a typical woman.

The writing itself feels amateurish, and there are a surprising number of typos and editing mistakes for something that was originally published in the 80’s. However, lets forgive that, in light of the popularity of Harry Potter and Twilight. Everyone’s got to start somewhere.

The characterization was non-existent. Every single last stinking one of them existed solely to praise the main character. They were props, without even a semblance of a personality between the lot of them — even the main male character who served as The Husband. I’m not even sure how many characters there were, because they were all the same cardboard cutout.

And the main character wasn’t even likable.

Overbearing was the word that kept floating in my head, and I died a little inside every time she opened her mouth or did anything. I kept thinking, “Good God woman! Just get off my back already!” and I wasn’t even the one she was criticizing and bossing around.

The plot was non-existent, and everything that happened was obviously a lead up for gratuitous sex scenes, that weren’t particularly sexy — in fact, the obsession with the man’s tongue practically tickling tonsils kind of left me feeling a little gaggy.

To top it off, there were a lot of modernisms that were just plain hoakie, and I’m not even referring to the frequent use of the word “hot”. Despite the fact that the book is set in 12th century Scotland, I don’t think the author researched anything past the word ‘bliaut.’

While it’s not the worst thing I’ve ever read, I still wouldn’t recommend it.

If you decide to read it anyway, then you’ll understand what I mean when I say that the rocking chair was the corniest thing ever.