The best course of action came to him in the middle of the night. Hartmann had seduced the bar chick by playing coy, but she was the exact opposite of Carol in many ways – such a tactic would backfire if he tried it. Carol, the woman who had perfected invisibility to survive, needed to be seen.

If he acted distant or kept her waiting, she would fade away before he had the chance to make his move. He needed to keep her in his sights. He needed to let her know beyond a doubt that he had seen her.

So, the next morning when he rejoined Carol and captain Lambert, he gave her a warm smile. “Hello,” he said. “Are you rested up for more training?”

She nodded, answered, “Yes, master sergeant,” and looked up to meet his eyes. He noticed the fleck of green in her otherwise brown eyes, and thought about how appropriately they matched her. There was something about Carol that was easy to pass over, that hinted at something colorful inside of her, that he was only now beginning to see after all the time he had spent watching her. Hartmann liked her eyes, and only after Lambert gruffly ordered her to approach him did he realize that he had been staring.

“Let’s get this radio on you,” Lambert said, clipping the receiver onto her shirt. “We’re going to practice some maneuvers in the Suit today.”

“Yes, sir.” Carol climbed the ladder up to the cockpit of the Suit, then hesitated and glanced back at Hartmann. He nodded.

“Corporal Holmes is bringing the jeep around for us,” Lambert said quietly to Hartmann. “I want to see how she handles the Suit while we transition outside.”

“She should do much better today, sir,” Hartmann answered, somewhat reluctantly. “Provided that she doesn’t forget how much bigger she is.”

Lambert lifted the radio to his mouth and pressed the button as he asked, “Carol, are you settled?”

“Good. We’re going back out to the airfield, where you will be drilled on the essential skills of running and stopping.”

There was something redundant in Hartmann’s presence. As the top pilot, he knew that he belonged there to offer his expertise, but there wasn’t anything new for him to say; Carol was the one who had full access to the Suit, while he had merely mastered the demo version; he had no clue how much more the Suit was capable of. With Lambert coaching her through the drills, Hartmann was left to sit and watch.

“Is that all, sir?” Carol asked, sounding surprised.

“It’s harder than you think, commander.” Lambert shook his head. “Go on and get your ass outside.”

“This is all unorthodox,” Hartmann muttered as they watched Carol precede them through the giant double doors. “I suppose that we aren’t going to bother with teaching her how to stand at attention and salute.”

Lambert shook his head. “Carol is … the classified radical faction in the military. We can skip building her identity as a soldier and go straight into the specifics of what she needs to know.”

“Like how to take out the enemy without blowing up a hospital in the process.” Hartmann smirked. “We’re in trouble, sir.”

“I know.” Lambert lifted the radio up and spoke into it, “Okay, Carol. There’s a mile marker painted on the ground out there. I want you to run as fast as you can, then stop precisely on it without overshooting.”

Corporal Holmes was ready with the jeep, so Hartmann waited until they were both settled in their seats with the younger soldier as a witness before he said, “You need to teach her proper radio protocol, instead of using it like you’re chatting on the phone to your girlfriend … sir.”

Lambert’s jaw twitched, and his face turned the slightest bit red. Holmes silently chuckled. “You’re right,” he admitted quietly, then cleared his throat. “She’s going to need to know how to communicate efficiently.”

As they approached in the jeep, Hartmann said, “Looks like she overshot,” and pointed to where the Suit was standing some distance away from the marker.

“Dammit,” Lambert growled, then said into the radio, “Carol, you’re way off. Over.”

“I’m sorry, sir. When I tried to stop, my feet just kept going on their own,” she replied.

“When you’re done speaking, you need to be in the habit of saying over.” Lambert rubbed the bridge of his nose. “You know about stopping distance with driving a car, right? Over.”

“No, sir. I’ve always ridden the bus.” There was a pause, then Carol quickly added, “Over?”

“Of course she wouldn’t know,” Lambert muttered to himself. “That would be too convenient.”

Hartmann took the radio. “MSG Hartmann here. Bigger objects like the Suit get a lot of momentum going, especially when you’re moving fast. If you want to stop on target, you need to start slowing down before you reach it. Try again, now. Over.”

Lambert scowled. With his little comment, Hartmann had put the captain in the position of becoming self-conscious about how he treated his subordinate, and it was starting to eat at him. Especially with corporal Holmes silently bearing witness.

I wrote this a few months ago as part of The Scion Suit, but I’ve decided that I won’t be using this scene in the final version after all.

Hartmann sat at the bar, his hand lax around an untouched glass of scotch. A woman sat next to him, chittering nonstop, although he wasn’t listening to a word that she was saying. He was staring at her lips, studying the neatly applied red lipstick with a crisp outline and a perfect cupid’s bow, and his gaze had the woman giddy.

Carol’s lips had been pale and dry. She had been too shocked to react the moment his mouth touched hers, but he had expected that – Carol was the sort who hadn’t kissed anyone in years … if she had ever kissed anyone at all. He had taken his time and moved slowly to keep from overwhelming her, feeling the change in her breath as her eyes had closed and her chin lifted up.

Afterwards, Hartmann had told himself to stop pursuing Carol, before she damaged his ability to touch another woman. He had rounded up a couple of his guys to head out for a night of fun, but now that he was there, he found that he couldn’t engage. He couldn’t stop thinking of Carol.

Her lips had been vulnerable and responsive. Somehow, with very little movement, they had begged him not to stop, and he knew that Carol hadn’t been internally counting down the seconds till she could move on to the next step. He had felt wanted.

The woman sitting next to him, with the perfect lipstick and low-cut top didn’t want him. To her, he was no different from any other man, and if he didn’t pick her up, then someone else would. The cheap, meaningless pleasure that she offered held no appeal in contrast to what he had tasted with Carol.

She stopped talking and leaned close to him with her eyes half closed, and Hartmann couldn’t stop himself from jerking back with a disgusted look on his face. The woman snatched up her purse as she cussed at him, then stormed away, and he finally took a gulp of his drink.

Sergeant Brown sat down next to him in the woman’s empty spot, ordered two more drinks, then studied Hartmann for a moment before asking, “What’s up man? I’ve never seen you so far out of the game.”

Hartmann remained silent, but finished his scotch and set the glass back on the bar, where he traced the circle of the rim with his fingertip, remaining deep within his thoughts.

“If you keep bombing this badly, I’m gonna start thinking that you’re hung up on some bitch,” Brown added after a moment.

Hartmann didn’t really want to talk about it, but the idea of Carol being referred to as ‘some bitch’ galled him – a lot more than he’d expected it to. He glanced over at Brown with a scowl, then back at his glass. “She’s not a bitch,” he muttered quietly. “That’s the problem.”

“Oh come on, man,” Brown snorted derisively. “That just means you’re the one getting played.”

“Nah. She’s way too pathetic for that.” Hartmann couldn’t stop the small smile that twitched at the corners of his mouth. Despite his choice of words, he didn’t intend it as an insult – it was something about Carol that made her irresistibly endearing to him. In the moments when he wondered how she had managed to survive on her own in her former life, he also deeply wanted to be there for her in the future.

“Hell, I don’t believe you.” Brown waved his hand dismissively. “Women only care about themselves, money, and orgasms.”

That made Hartmann laugh. “This one is different, and now I’ve got to prove that I’m not full of shit.”

Brown drained his glass and set it down as he asked, “To me, or to you?”

“Both,” Hartmann replied, then signaled the bartender over for a refill.

I know, everyone is all like, “Oh my god, she’s beating a dead horse! The story wasn’t that good.”

But ha ha! I intend on turning this horse into GLUE! The only escape is to stop reading my blog, bwahahahahahahaha!

Actually, I’ve had a really crazy week, and now I’m coming down sick/loopy from the stress. Hoo-rah!

ANYwho, some of my personal notes on The Scion Suit: 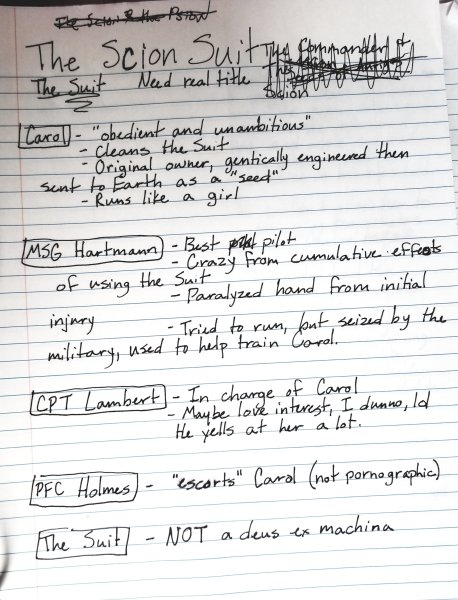 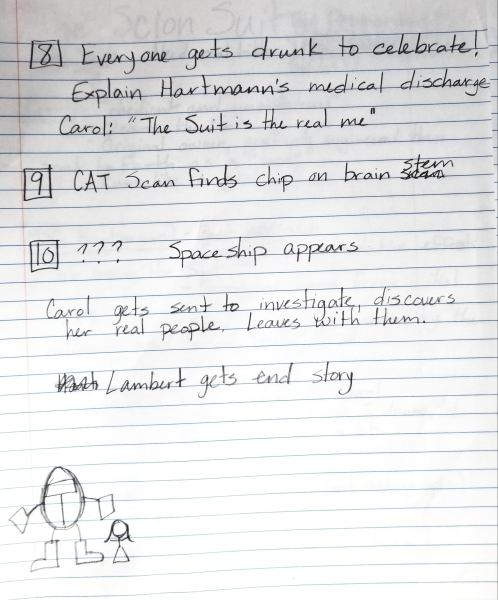 I changed a few things for the final version, but you can probably see how things evolved.

Not pictured: Research into military rankings and culture. This was the hardest part for me; I didn’t want to be blatantly wrong, but the only personal experience I have is a handful of conversations with a couple of ex-military guys. I’m not actually sure if Lambert would have had his own office as a captain.

Also not pictured: Lots of brainstorming with my husband. He’s my number one source of inspiration, meaning he comes up with the ideas and I steal them. Just kidding. He knows how to get my juices going. Lol.

Why did I choose that particular prompt?

My method is to sort by ‘new’ then keep scrolling until I find something that stands out to me, and ignore popularity altogether, because I’m an arteest and not an attention whore. I picked that prompt because it reminded me of a reoccurring dream that I’ve had several times over the past few years, and I very nearly wrote the dream as my response. However, I very quickly decided that the dream deserved the time and attention that I put into my novels, and opted to come up with an entirely new story instead. The dream was still a major influence.

Then the prompt got popular. Whoopsie.

So there you go.