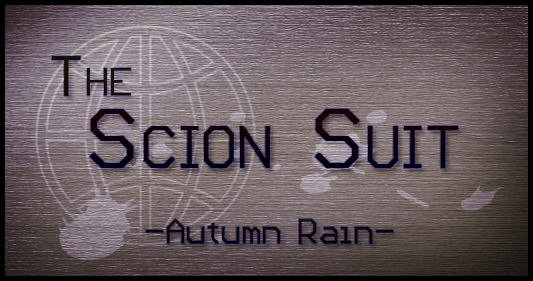 Carol was let out of her room by someone she didn’t recognize. He introduced himself, but she didn’t catch his name, and when she asked what happened to Lambert she was curtly told that it wasn’t her business. She was to pilot the Suit up to the spaceship and not ask questions.

She wasn’t going to complain. Carol made sure that she was acting ‘unambitious and obedient,’ hanging slightly behind the new man and biting the inside of her cheek to keep herself from grinning. She didn’t speak a word the entire time as she walked to the bunker, clipped the radio onto her shirt, and climbed into the Suit.

Holmes looked suspicious at her turnaround from earlier, but he didn’t tattle. Instead, he waved with a melancholy expression on his face, as if to say, “Goodbye forever.” She didn’t wave back.

“All right, we want to make peaceful contact if possible, so don’t attack unless absolutely necessary. Do you understand?” the new man said.

“Yes sir,” Carol answered mechanically. It was difficult waiting for the signal to leave, but she reminded herself again and again that she didn’t want to ruin her mission at this point. She was going to the spaceship, and that was all that mattered.

It felt good to be inside the Suit again, to move around as her real self. The contrast made her realize how much she hated her tiny human body in comparison, and she wondered if she could live inside indefinitely. She knew that she didn’t have the strength to exit ever again.

Lambert had known that too.

The flight to the alien craft was short. Without thinking about it, Carol directed herself toward the aft where the Suit’s instruments indicated a landing bay was opening up in response to her approach. She had been expecting that.

As Carol approached the opening, waves of inexplicable feelings washed over her, including excitement mixed with apprehension. But most overpowering of all was the unmistakable sense of homesickness, and the peculiar sensation of doors opening within her mind that she had never known existed.

She felt a tug as she crossed the threshold of the bay, and automatically spun to land on her feet, reacting instinctively to the artificial gravity which lent her surroundings a clear “up” and “down”.

All around her were mechanical constructions, strange yet familiar; stacks of cargo and materials; and most significantly, standing in the shadowy rear of the bay, was another Suit like her own.

She took a hesitant step toward the other Suit, then another – with every moment the uncertainty hindering her seemed to fade away as recognition took its place. She knew this person. How was that even possible?

The words simultaneously scrolled across her visor and echoed in her ears, although she was quite sure she hadn’t actually heard anything. Her steps broke into a run, and she skidded to a halt when she was practically touching him. She reached out with both arms, her palms facing him, and he returned the gesture, leaning forward to touch their hands together.

The next few fractions of second happened very quickly. It was like sitting in a comfortable room with an old friend or close family member, and they spoke easily to each other, although neither of them were moving their lips.

“It is good to see you again,” the Suit said. “What do you call yourself now?”

“That is a good name.” He nodded, approvingly. “You might not remember mine – I am Xigian.”

Carol floated through their dream-like exchange. It was easy to accept whatever happened, but she still had questions; she had been born on Earth, and to her knowledge had spent her whole life there. How did she know this person?

Xigian gave a gentle chuckle, and there was the strong impression that he reached forward and squeezed her shoulder fondly, even though neither moved.

“I’m as human as you are – well, not exactly. In a sense, you’re a lot more human than I am … but in another sense, neither of us are human at all.”

Carol frowned, confused. She hated it when people gave roundabout answers to direct questions, then expected her to understand what they were talking about. “But I am human! I remember growing up on Earth. And if I wasn’t, the doctors would have noticed when they were busy poking and prodding me just a few days ago.”

Xigian shook his head. “That’s … partly true. One part of you, the human part from which you got your name, was indeed born on Earth. But you, the Commander, were not. That part of you came from here, from me – I created you.”

“How?” was all that Carol could manage.

“Our people are the Aurigans. We’re not entirely mechanical, but we’re not entirely biological, either. The Commanders are our mechanical aspect. It’s a chip about the size of –” he paused, as if looking something up “– about the size of your little fingernail. When a new Commander is created, a body is created along with it. But that body is incomplete until the biological component is added to it.”

“Then… the Suit really is me.” It was the most wonderful news that Carol had ever heard. It was no wonder that she had loved it so intensely as she cared for it.

“It completes you. Your body – your biological body – is also you. Or a part of you. We approach the limits of what can be achieved with mechanical processing, but that is not enough. To be whole, we require a biological brain as well. Usually, those are grown from samples we have of species we have encountered before – but every so often, we encounter a new race whose abilities are interesting enough that we wish to expand ourselves to include them.”

“So you sent me…” Carol nodded, then a thought niggled at her. “But why did you wait so long? Why was I forced to exist… incomplete… for over thirty years?”

Again, there was a brief pause, as if Xigian were referring to some invisible source of information, before he replied, “It was only twenty-eight Earth cycles. Your body was around three when you joined it.”

A wave of horror washed over Carol and she exclaimed, “No! You couldn’t have … I couldn’t have! I was found as an orphan! Did you… my parents…” She trailed off, feeling numb at the suggestion. Was her beginning really that dark?

“No, you didn’t kill your parents. We aren’t interested in harming the species we encounter. Your earliest protocols would have guided you to seek out and identify a very young member of your target species that was in a significant state of physical and psychological distress, and separated from its parents. The child you found probably would have died without your intervention. We study our targets thoroughly before sending a Commander to integrate with them; you would have known exactly what to look for.”

She was relieved. Carol couldn’t have accepted the idea of tearing a child from its parents, but did take comfort that she had saved a child’s life – her life.

“You were installed into your target, but integrating takes a long time – not just to grow the connections, but to allow the Commander to adapt itself to its host. It functions like another decision making center in the brain, but it has to work effectively and fluidly with the others. Without that, there wouldn’t be any point – we can harvest corpses as much as we want for biological material, but without integration we don’t gain the unique aspects that make each species so distinctive.”

An image from an old sci-fi movie that she had once watched flashed across Carol’s mind, and she shuddered in response, blurting out, “Biological material? That sounds more than a little distasteful.”

Xigian shrugged. “Perhaps it is, but we’ll need enough genetic samples to produce more human bodies when we want them. Plus, that’s how we come to understand the hosts enough to make integration possible.”

Carol was a little giddy from the weight of everything that she had learned. “Is that all? I had horrible images of human bodies being reused somehow. That just seemed all wrong.” She giggled, and wanted to lay down somewhere dark and quiet. She wished the Suit would activate the help system and everything would make sense.

Her companion frowned slightly. “That’s an interesting aversion to have. You’re right – we don’t do that – but the idea doesn’t bother me like it does you. I hope when you complete your Remembrance that I’ll understand better.”

There was an unusual telescoping sensation as both Carol and her companion let their hands drop to their sides again. From her internal chronometer, she could tell that approximately a quarter of a second had passed during the entire exchange.

Xigian turned to leave the landing bay and Carol trotted to walk beside him, the two of them falling into perfect unison. They spoke without words now, and without the visor. She felt as if her heart strings were being tugged in every direction, but one thought emerged as more important than the rest. She asked, “Hey, you said you created me. Does that make you my father?”

“Father – another concept humans value highly. We encountered the familial terms early in our analysis; the EM communications of Earth are absolutely stiff with them. That was one of the things we wanted to gain. We do have creators, and creations, and we do take a special interest in them. I requested your retrieval personally because I was very curious to know how your integration had played out. But humans go far, far beyond that with their creators and creations. The extremes humans go to in order to protect or enhance their creations is extraordinary – unrecorded in our studies of any other species. We decided that gaining that would be enormously beneficial.”

Sorrow welled up inside her chest, but was abruptly carried away as if the help system had activated in response to her wish. With detached clarity, Carol reflected that he wouldn’t understand how much the question meant to her, not until her human experiences were shared with the Aurigans. When he did understand, he could greet and comfort her as her long-lost father. Until then, it was illogical to be hurt by his indifference.

But she still wanted to express how she felt.

She reached toward him, and Xigian did not resist, humoring her as she clasped his hand in hers and threaded their fingers together. Together they walked out of the landing bay – no longer an orphan, she walked hand in hand with her father as he led her home for the very first time.