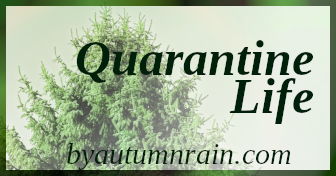 After a weekend of rampant indulgence, it’s back to the grindstone . . .

When the internet started throwing around the phrase, ‘Social Distancing,’ I was the sort who said, “Lol, what’s the difference?” I’m pretty much a certified homebody, I avoid crowds, and it’s not like I have any friends that I hang out with anyway. I’ve been practicing “social distancing” for the last ten years, though I prefer call it things like, “introversion,” “homesteading,” and “homeschooling.”

As it would turn out, there is a difference.

My plans to pickle beets were totally dashed when all the nearby grocery stores sold out of white vinegar. Bummer.

And I take a great deal of comfort in the fact that we have a healthy supply of fabric diaper wipes, in case our package of toilet paper runs out before the stores get restocked. Not that we’ve been fanatically checking, but should the need arise . . .

Positively speaking, I actually do appreciate that it’s gotten harder to slip into laziness — I feel obligated to make my own brownies, instead of using the “Meh, I’m tired,” excuse to buy chemically-laden, GMO-ridden, food substitutes that are vaguely chocolate flavored. I tend to do that too much.

I felt an irrational sense of umbrage when I saw a news article talking about how the latest Animal Crossing game is making a good distraction during the quarantine. I’ve been a huge fan of the series ever since the game first came out on the N64 clear back in 2001, and I’ve spent ages and ages counting down to the release date of New Horizons. Heck, I pre-ordered the game before this whole pandemic thing began. I am not some simple boredom buster — I AM A HARDCORE FAN.

And I feel like my nerdiness is going to get lost underneath the masses of people who can’t figure out how to have hobbies on their own.